The first photo of Jay Leno has been released after he suffered severe burns in a car fire. 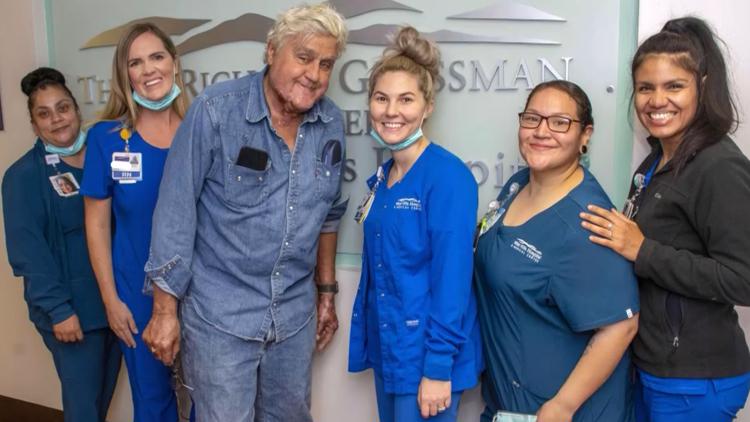 The burn center where Jay Leno was being treated shared a photo of the former “Tonight Show” host as he left the hospital.

LOS ANGELES — Comedian Jay Leno is on his way home after more than a week in the hospital where he was treated after suffering severe burns after a fire broke out while working on a vintage car.

“I am pleased with Jay’s progress, and I am optimistic that he will make a full recovery,” Dr. Peter Grossman said in a statement shared with several media outlets announcing Leno’s release.

Grossman previously said Leno had one surgery and another was planned.

The fire broke out in the Burbank garage where Leno stores his famous collection of cars and other motor vehicles. In a statement last week, Leno called the burns “serious” but said he would only need a week or two to get back on his feet.

Grossman said he admired Leno’s eagerness but urged him to be realistic.

“I had to tell him that he had to step back a little bit and just realize that some of this takes time.” They said. “He’s very accommodating, he understands it. I think he’s realizing that maybe he needs to take it. A little slower than he initially expected.”

The doctor said he expected Leno to make a full recovery but it was too early to know if there would be “residuals” from the injury. He did not elaborate.

Leno, 72, currently hosts “Jay Leno’s Garage” and the latest revival of the classic quiz show “You Bet Your Life.” Known for his passion for cars, Leno has a vast collection of automobiles and motorbikes.