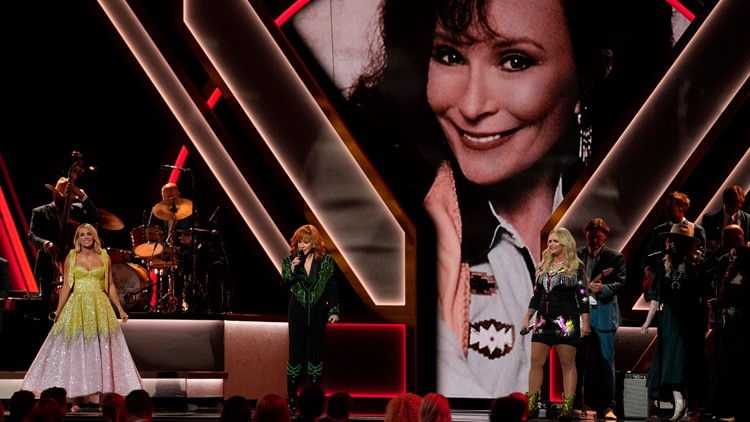 Nashville, Tenn. — Luke Coombs was crowned Entertainer of the Year on Wednesday. Country Music Association Awards, It’s the second year in a row that he has taken home the top honor of the night.

Combs dedicated the award to his wife and newborn child, saying, “I want to thank country music for making my dreams come true.” Her win followed a performance-packed three-hour show that honored country icons and new voices.

“Country is sounding more country tonight than it has in a long time,” Combs said. He also won Album of the Year for “Grown Up.”

The superstar trio performed a medley of Lynn’s hits including “You’re Not Woman Enough,” “Don’t Come Home A-Drinkin'” and “Coal Miner’s Daughter” as photos of Lynn were projected behind them. And audience members sang along.

Rock pioneer Jerry Lee Lewis, who admires Lynn. He passed away last month A wonderful tribute was performed by Elle King and The Black Keys.

Alan Jackson accepted. Lifetime Achievement Award, explaining how a movie about Hank Williams inspired him to move to Nashville when he was flat broke. He cried during his speech and ended by telling the audience, “I’m still living that honk-tonk dream.”

“All of the people in this category deserve this award,” Stapleton said.

He named the honor for his 12-year-old daughter, whose birthday was on Wednesday.

Among the country’s biggest stars in attendance for the evening were Katy Perry and actors Jessica Chastain and Michael Shannon, who play Tammy Wynette and George Jones in an upcoming Showtime limited series, and Combs on the night. Presented the greatest honor.

Perry took the stage and performed “Where We Started” with Thomas Rhett during the show.