A California bakery makes a life-size Han Solo out of bread. 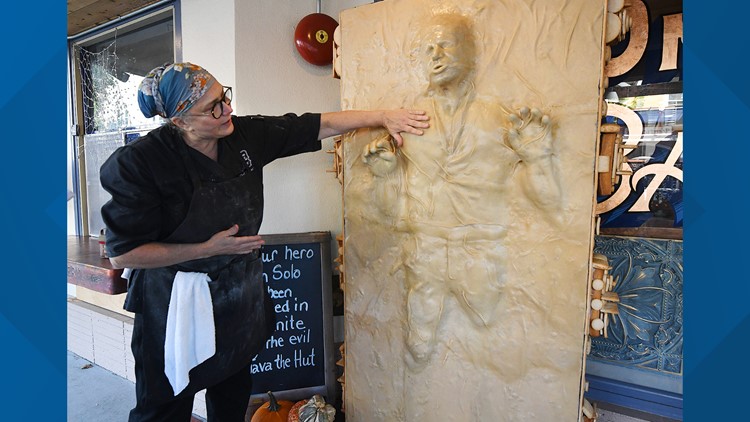 BENICIA, Calif. – Han Solo can be a hunk. But “pan solo” is a piece of bread.

This is what one The bakery The San Francisco Bay Area has dubbed a 6-foot bread statue of the “Star Wars” character as he appeared after being frozen in carbonite in “The Empire Strikes Back.”

Hanali Provan and her mother, Kathryn Provan, co-owners of One House Bakery in Benicia, California, spent weeks molding, baking and assembling the life-size sculpture using wood and two types of flour. A type of unleavened flour is also included. Sugar content that will last longer.

Both used to work at night after doing business during the day. Lovingly crafted details show Han Solo’s troubled face and his hand straining to reach out.

Hanali said she might have become a little obsessed.

“Mom forced me to give it up because I was obsessed with lips,” Hanali Parveen said The New York Times. “She was like, ‘You need to get out of there.’

He told the newspaper that making the pen solo was especially meaningful, since he contracted COVID-19 in January 2021 and lost most of his senses of smell and taste.

“So just finding joy in a different part of the food is really important,” she said.

RELATED: ‘Halloween Ends’ Succeeds at the Box Office but Rekindles the Streaming Debate

The sculpture is now on display outside the bakery, located about half an hour north of San Francisco.

Pan Solo is the bakery’s entry in the annual Downtown Benicia Main Street Scarecrow Contest. The public will vote for their favorite from more than two dozen entries submitted by local businesses.

Pervans, who are big fans of science fiction and fantasy, entered another “Star Wars” themed creation in 2020 featuring the Mandalorian and Baby Yoda.

So as a wise Jedi might warn: Don’t use forks, Luke.